Local brewery The Odd Pelican Beer Co. has created “Bud’s Brew,” a golden ale that pays homage to town founder Robert Davis’ beloved late dachshund, Bud. Stop by Bud & Alleys for your first taste of the Seaside Suds line and look out for the brew on tap around town.

The Odd Pelican Beer Co. was started by Hunter Davis, a talented private chef, alongside his business partner, Anne Margaret Harrison. Hunter has cooked for the stars on 30A with his private catering company The Dish & the Spoon, and now he’s bringing his expertise and passion for entertaining to his brand new brewery.

On St. Patrick’s Day, town founder Robert Davis, his son Micah Davis, and even their beloved doodle, Gracie (don’t worry, no brews for her) partook in a festive happy hour to taste test the latest flavors. 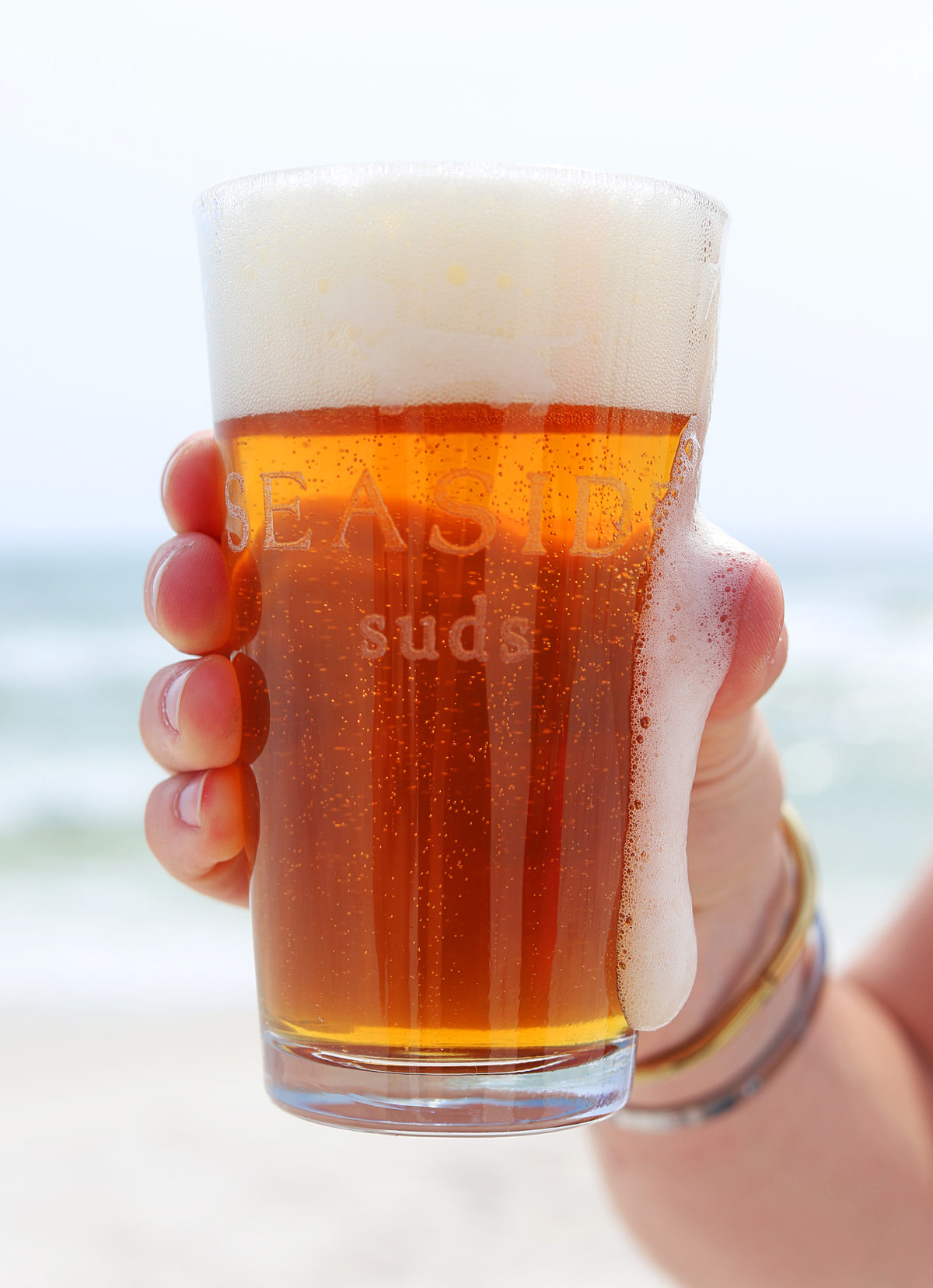 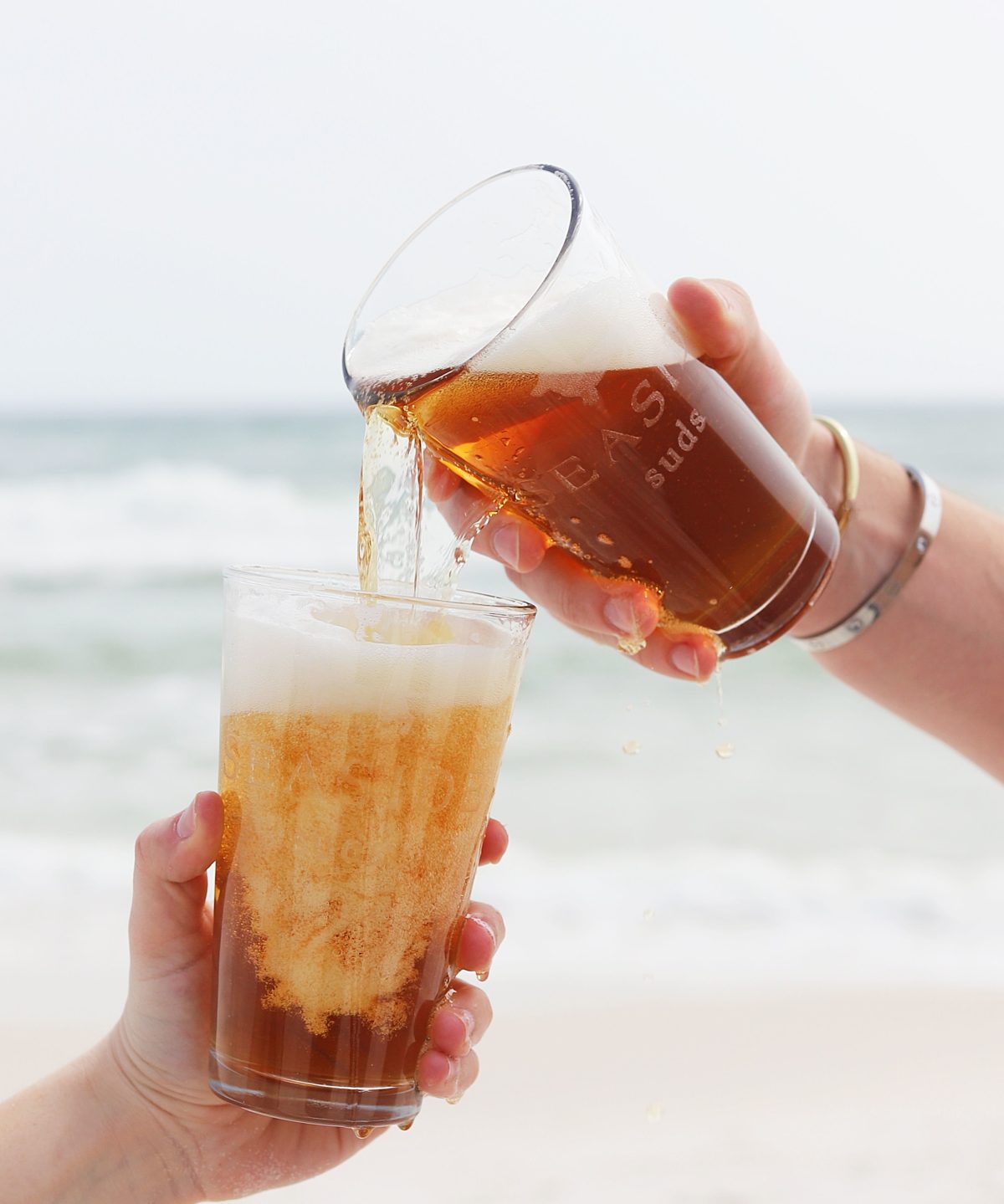 Hunter has lived on 30A since he was two and calls himself “the closest you can be to a local without being born here.” And as Seaside celebrates its 40th anniversary this year, he says that he grew up with the town.

He reminisced on his early days when “Seaside was just a kid” and so was he. “I have memories of riding bikes around Seaside, swimming, rolling down the amphitheater lawn when there was only a wood stage (which I fell off of and cracked my head open), all while watching the town grow and evolve.”

Hunter was in the first class at the Seaside Neighborhood School, ran into Jim Carrey while he was filming the Truman Show, and got his first taste of the food industry when he worked at Modica Market and Dawson’s Yogurt. Now, he brings his own kids to Seaside, which he says “always feels like home.”

As a teen, he started working at the Summer Kitchen Cafe in Rosemary Beach as a dishwasher, where “they called me the silent scrubber because I was so quiet.” He went on to work there on and off for 12 years, as well as at Cafe 30A and Bud and Alley's.

In 2012, he started his own personal chef service, The Dish & The Spoon. “At the time, there were only a handful of personal chefs in the area, so it was a pretty new concept for 30A,” he explains. “It didn't take long for people to catch on to the idea of having a restaurant quality meal prepared right in your rental home.” Then, his interest in brewing began. 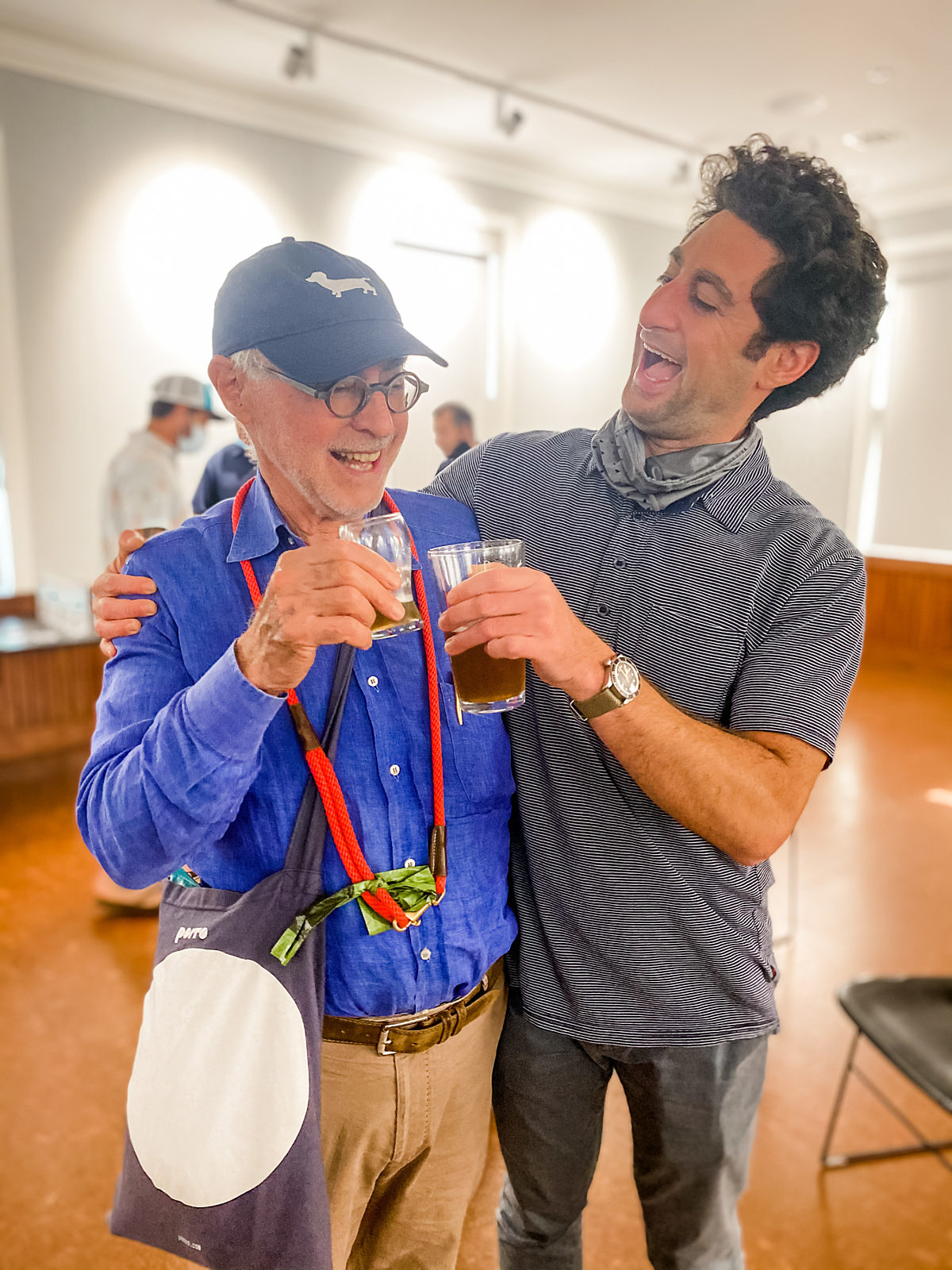 “About a decade ago, a friend of mine was brewing beer out of an old cooler and keg at his house and what he was producing was really good. I was extremely interested in the process, so he taught me how to home brew beer,” he said.

Over the next few years, he considered starting a brewery, a concept he discussed with town founder Robert Davis, who was interested in Seaside having its own brew. When everything shut down due to Covid-19, Hunter and his wife, Jodie, began exploring the concept in earnest. “Jodie looked at me and said, I think it's time you open up that brewery now.’”

“Ever since we discussed having a Seaside Suds line and Bud's Brew I had a pretty good idea of what I wanted the beer to taste like. I wanted it to be a light beach beer that still had great flavor. The first focus was finding the balance of malts, getting that nice golden color and not being too malty for the everyday beer drinker,” Hunter said.

“Next up was getting the right hop profile. I wanted the beer to have some citrus notes with a hint of pine, but not be confused with an IPA. I tried to keep the bitterness pretty low and focused more on picking up the fragrance and flavor of the late addition hops.” 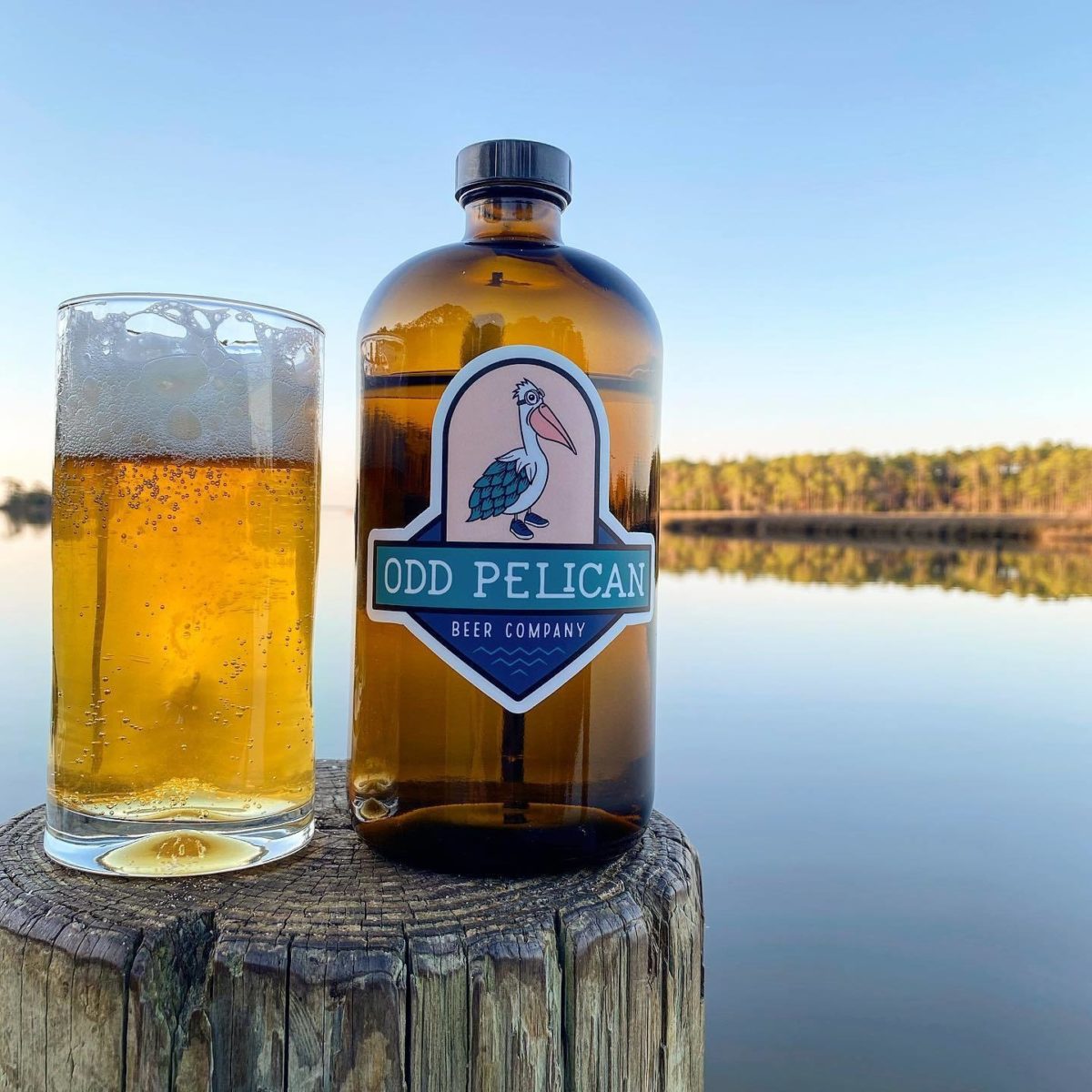 The name “Odd Pelican” comes from spotting pelicans with his dad while he was growing up.

“My dad would always say that pelicans fly in an odd number, and most of the time he was right. While working on names for the brewery, the pelican came to mind. Rather than going with the flow or following the flock, the odd pelican does their own thing and isn’t afraid to be itself.” 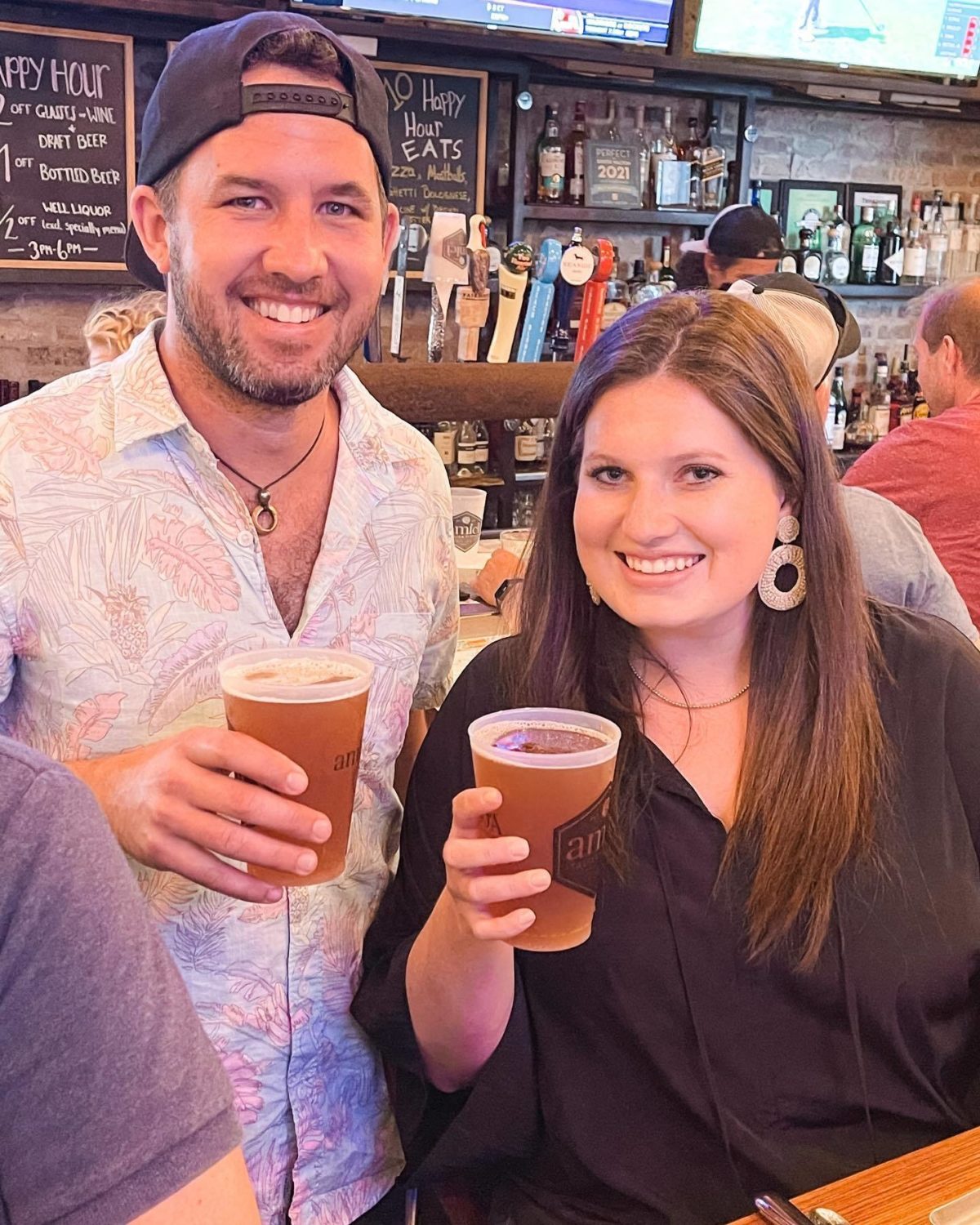 “I instantly admired their family's relaxed personalities and their genuine desire to help others,” Anne Margaret said, explaining, “Our relationship grew when we worked together after Hurricane Michael with Hope Panhandle to help the community recover.”

After she graduated from the University of Florida with a major in business and science and moved back home to 30A in 2020, she felt “the brewery partnership was a natural fit.”

“Because of the pandemic, life slowed down for everyone, and I was really learning to take advantage of the small joys in life. Homebrewing and beer tastings became a regular occurrence. Bringing friends and family together for beer tastings became one of the highlights of my year,” she said.

Their first beer in the Seaside Sud’s line is the Golden Ale Bud’s Brew, which Anne Margaret calls “an easy-drinking, refreshing light beer with citrus notes that makes it perfect for the 30A lifestyle.” The beer pays homage to Bud, the dachshund who belonged to Seaside’s town founders.

Bud's Brew is currently available on tap at Bud and Alley's, Pizza Bar, Modica Market and soon, Great Southern Cafe, with plans to expand to cans later this year.